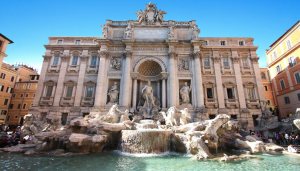 The Trevi fountain has been reopened following a €2 million restoration project sponsored by fashion house Fendi.

The unveiling of the newly-pristine fountain was accompanied by a light show attended by large crowds on the evening of 3 November.

The baroque monument remained partly accessible to visitors throughout the 17-month renovation process, thanks to a temporary bridge and transparent panels.

The repair work focused on the façade after fragments of laurel leaves to the left of the fountain became dislodged in 2012 following freezing temperatures.

Fendi recently moved into its new head office at the Palazzo della Civiltà Italiana in the EUR suburb of Rome.