Three hundred forty two miles west of mainland Costa Rica lies an oceanic island so spectacular Jacques Cousteau called it the “most beautiful island in the world.” Cascading waterfalls cut through lush foliage, the symphony of a thousand seabirds echoes in your ears, and the surrounding deep waters host a diversity of wildlife found almost nowhere else on the planet. Isla del Coco’s extreme wild beauty appears Jurassic – and was in fact used in the movie of the same name. It seems as though you’ve gone back in time, to a time before humans.

Our ship, the Argo, was greeted by spinner dolphins who leapt and twirled at her bow as we entered the boundaries of Cocos Island Marine Park. After two days on the open ocean, the green towering mass of land before us was a most welcome sight, but the real anticipated pleasure was beneath the surface – the chance to dive with many species of sharks. Cocos is known for its shark populations; many species migrate throughout the Eastern Tropical Pacific from Galápagos to Colombia, Panama and finally to Costa Rica. Schooling hammerhead, Galápagos, and silky sharks are frequent visitors, as are tiger and whale sharks. There is also a large resident population of white tip reef sharks. Together, these top predators shape the food web and maintain a healthy ecosystem.

The expedition is led by Mission Blue founder Dr. Sylvia Earle and Nicolás Ibargüen, environmental correspondent for Fusion. Like me, many of the others onboard are experienced shark divers: shark conservationist Ocean Ramsey, I AM WATER Ocean Conservation rust’s Hanli Prinsloo and Peter Marshall, Shark Angels founder Julie Andersen, Undersea Hunter co-founder Avi Klapfer and Mission Blue’s Director of Photography and Expeditions, Kip Evans. Also with us are a couple of new shark divers who are excited to have some encounters, including actor Adrian Grenier and editor-at-large for Bloomberg News Stephanie Ruhle.

Originally, our intent was to visit Cocos to highlight the success of this World Heritage Site, which has been a sanctuary for wildlife and a bucket list dive destination. Unfortunately, a week before our trip we heard from PRETOMA – one of Mission Blue’s nonprofit conservation partners in Costa Rica – that the Costa Rican government’s Ministry of Environment and Energy (MINAE) had allowed the export of endangered hammerhead shark fins despite international commitments not to made by the previous president, Laura Chinchilla. The two shipments were sent to Hong Kong to feed the seemingly insatiable market for shark fin soup in Mainland China. Sources estimate that the number of sharks killed for these shipments was representative of close to 2,000 hammerheads.

The two species of shark included in these shipments were the scalloped hammerhead (Sphyrna lewini) and the smooth hammerhead (Sphyrna zygaena). The Eastern Pacific population of S. lewini is considered endangered by the IUCN Red List of Threatened Species and the U.S. Endangered Species Act. Both S. lewini and zygaena are listed on CITES (Convention on International Trade in Endangered Species) Appendix II – a resolution to which Costa Rica signed on in 2013, making it a violation to import or export these species without first verifying that the animals are being fished sustainably with legitimate certificates of origin.

Randall Arauz, President and founder of PRETOMA, reported that the new government of Costa Rica, which is nearing the end of its first year in office, allowed these recent shipments of shark fins without the necessary verification, violating its international obligations and further threatening an already endangered species. However, under pressure from Costa Rican citizens and the international community, the Ministry announced on March 2nd that it would abide by CITES and ban shark fin exports pending a review that will likely occur in the next six months. In the meantime, catching, landing and slaughtering hammerhead sharks continues unabated in Costa Rica, and Mr. Arauz expects that shark fishers are stashing fins for export anyway, stating, “The [fishers] are going to dry these [new] fins and stash them. What happens if the [CITES review] says they can’t do it anymore? They’re going to use the same argument that the sharks are already dead and there is no conservation benefit in not allowing the fins to be exported.” The Ministry will have the ability to stop this action, but many environmentalists are not optimistic that they will given that the declared customs value of one ton of hammerhead fins is worth more than $100,000. Arauz expects the new government to prioritize profit over conservation.

Given this ominous news, our expedition to Cocos Island became about shining a light on this abuse of the legal framework for shark protection, and protesting the trade of shark fins – ironically by the very government that the world has come to applaud for protecting them. We sought to create media that would help engender support for shark protection, and spark outrage that these shark fin exports could happen in a country that prides itself on its environmental stewardship.

We did several dives each day, many times below 95 feet looking for hammerhead sharks. Though we saw many white tip reef sharks, we saw very few hammerhead sharks. Just a few years ago I saw hammerheads on every dive here, but now they were scarce. We did catch glimpses of them, and on the last dive at Alcyone we saw a school of about 25 swimming deep below us, but nothing like what we had hoped for.

We found fishing lines in the Marine Park and saw hooks in the mouths of Galápagos and silky sharks that were feeding on bait balls. We can’t prove that the fins that were exported came from sharks in the Park, but we can say that there is poaching there; the park rangers told us so and we saw evidence of the longlines. Randall Arauz later informed us that The Ministry of the Environment “has a list of all the illegal boats they see fishing in Cocos Island. And it turns out that one of those boats was seen at Cocos Island fishing and a week later that boat landed its products in Puntarenas and those hammerhead shark fins got exported.”

For our expedition team, it was still thrilling to dive in Cocos. Some were expert freedivers and could get really close to dolphins, schooling jacks, groupers, eels, and all kinds of reef fish. We also had spectacular Galápagos and silky shark encounters during a bait ball event, and I even spotted a whale shark on one deep dive! But if the government of Costa Rica doesn’t step up to protect hammerhead sharks, I’m afraid they won’t be here at all the next time I visit Cocos. Will these magnificent animals only be seen as floating fragments in Chinese soup? The only way to ensure their survival in the wild is to impose absolute bans on hammerhead shark fishing, landing, commerce and the export of shark fins from Costa Rica to prevent poachers from being able to trade. Enforcement reforms in protected areas are also badly needed; many poachers even when caught are not prosecuted. And the Costa Rican fisheries management agency, INCOPESCA, needs scientists advising on the catch limits of allowed species, not just the fishermen that run it today.

As our voyage came to an end and we returned to the mainland, the beauty and fragility of Cocos’ diversity of life played on in my mind. I resolved to do what I can to help protect this special place, and you can help too!

Join Mission Blue in urging the Costa Rican government to enforce hammerhead fishing and fin export bans. Sign the petition and donate to support Mission Blue and PRETOMA in this fight. Together we can save sharks, save the ocean, and thereby save ourselves. 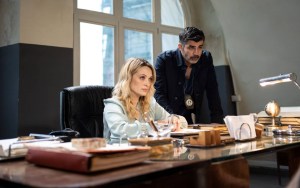