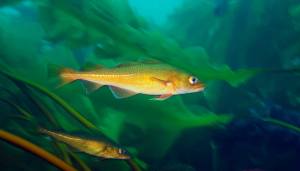 Led by Dr. Sylvia Earle, the Mission Blue team recently returned from a Hope Spot Expedition to Cashes Ledge, a pristine biological hotspot off the coast of New England. It contains Ammen Rock, a peak so tall that it disrupts the Gulf of Maine current, creating massive upwellings of cold nutrient-rich water that fuels an explosion of life from plankton and squid to mackerel, tunas, billfish, sharks, seabirds and a high diversity of marine mammals. The area is home to the largest cold water kelp forest on the Atlantic seaboard and provides a nursery for important New England fish species like cod, pollock, Atlantic halibut, and white hake. Check out the map for a better sense where the Cashes Ledge is located.

Through the expedition, Dr. Earle and Mission Blue Director of Expeditions Kip Evans are working to amplify the efforts of Conservation Law Foundation (CLF), Mission Blue and other environmental organizations in calling for permanent full protection of Cashes Ledge. She has also declared Cashes Ledge and the New England Canyons and Seamounts 150 miles off Cape Cod “Hope Spots,” critical marine habitats that, if fully protected, can help return the ocean to a healthy state. Filmmaker Robert Nixon (Gorillas in the Mist, Mission Blue) was on hand to document this conservation-oriented expedition for his new documentary, Blue Centennial. Local Martha’s Vineyard fisherman Captain Buddy Vanderhoop was also there to lend support for the permanent protection of Cashes Ledge and other important areas in New England’s ocean.

“Cashes Ledge is the Yellowstone of the North Atlantic,” said Dr. Earle after returning from the dive. “It is a unique formation, an underwater extension of the mountains of Acadia National Park. It’s a place known only to fishermen – and an amazing gathering of fish and other wildlife – until recent years when divers and scientists have explored and documented the nature of this glorious, golden forest.”

Early in the 20th century, actions were taken to begin protecting extraordinary natural, cultural and historic places – a network of parks and monuments across the United States landscape that has been called the “best idea America ever had.” Now, early in the 21st century, there is an opportunity to embrace comparable underwater treasures within the nation’s Exclusive Economic Zone, an area more than twice the size of the land.

“Diving on Cashes Ledge was an experience of a lifetime, in a lifetime of amazing underwater experiences,” continued Earle. “I saw for myself what scientists have been raving about for years – a miraculous mountain peak that comes close enough to sunlight to be crowned with a thriving forest of kelp and a richly diverse assemblage of coastal marine life in the open sea. Permanent full protection for Cashes Ledge and the deep sea canyons and seamounts of New England will be a good for the fish, for fishermen, for the ocean and for all of humankind.”

In April, the New England Fishery Management Council (NEFMC) voted to continue temporary prohibitions on fishing for cod and other groundfish, but the area could be re-opened by the Council in the future to industrial fishing. Want to help ensure the continued conservation of Cashes Ledge? You can add your voice to this petition created by by our partners at the Conservation Law Foundation. Many thanks also to our partners at National Geographic, Google and the National Resources Defense Council for making this expedition a reality.